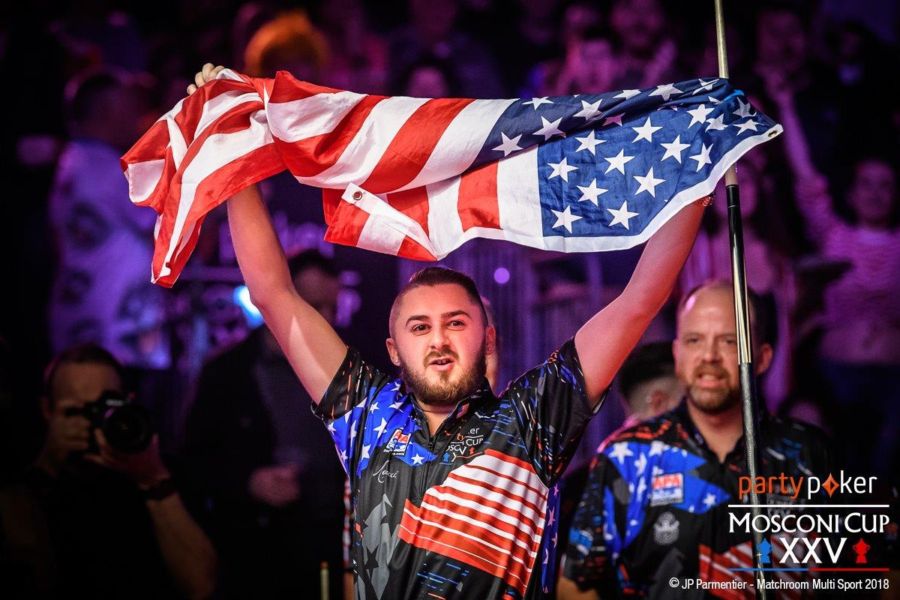 TEAM USA are just two points away from winning the partypoker Mosconi Cup for the first time since 2009 as they won their third session in a row following a hard-fought evening at the Alexandra Palace. Incredibly, 2005 at the MGM Grand, Las Vegas, was the last time that the USA had won three sessions in a row at the Mosconi Cup.

Having not won for such a long time, America were understandably massive outsiders at the outset of the event but now stand on the brink of a stunning upset as the galvanised team played with heart, grit and a huge amount of skill.

As the competition entered the crucial third day, the tension on the table was palpable. The opening doubles match, easily the longest of the Mosconi Cup so far, went right down to a decider as Tyler Styer and Skyler Woodward took the point from Niels Feijen and Albin Ouschan to increase the USA lead to three.

Woodward was back out next to face Alexander Kazakis and got another point on the board for the Americans. Kazakis, making his Mosconi Cup debut, looked under pressure as he struggled to take the advantage. A poor position on a 9 ball, followed by a missed bank into the centre pocket just about summed up his match.

In another full-bore match, Europe pulled one back in an epic encounter, winning in the deciding rack. Amazingly, it was Niels Feijen’s first victory of the event as well as the first for his partner Klenti Kaci.

At 4-1 up, it looked odds on for the Europeans but their opponents, Corey Deuel and Tyler Styer, staged a gritty comeback which exemplified the US spirit this year. Feijen broke in the decider and a good safety from Kaci off the break left nothing on but a hit and hope 3/9 for Styer. It went awry though and with the balls out in the open, the European duo ran out for the win.

Kaci said, “That was a big point for us. If we lose that we are 9-4 down and we probably didn’t have a chance but now it is 8-5 and we are fighting.”

Feijen added, “We had to really work hard for it and we did and, in the end, we finally got a reward after two days of hard work. The fans are right behind us and the atmosphere is unbelievable and we are enjoying every minute.”

The penultimate match featured home hero Jayson Shaw squaring off against Skyler Woodward, carrying a hot cue from his earlier singles match. And what a match it was!
Like two of the other three matches tonight, it went to a decider and no one could have predicted what drama entailed.

After levelling the match at 4-4 with a 3/9 carom from a cluster of balls, Woodward was in the driving seat with the break. He missed a bank shot on the 1 ball to set up a run out for Shaw but he missed a sitter under pressure.

Woodward then had the Scotsman hooked and he fouled, failing to hit a rail. Woodward messed up though with ball in hand as he got too close to the 4 ball. He left Shaw in a tight spot though and his attempted jump collided with the black 8 and Woodward made no mistakes with his second ball in hand of the rack.

The final match saw the widest margin of the evening as Alexander Kazakis and Albin Ouschan stood strong and beat Shane Van Boening and Billy Thorpe 5-1 to give Europe a glimmer of hope heading into the final day.

Play continues at 18.30 UK time on Friday with singles matches till a finish.