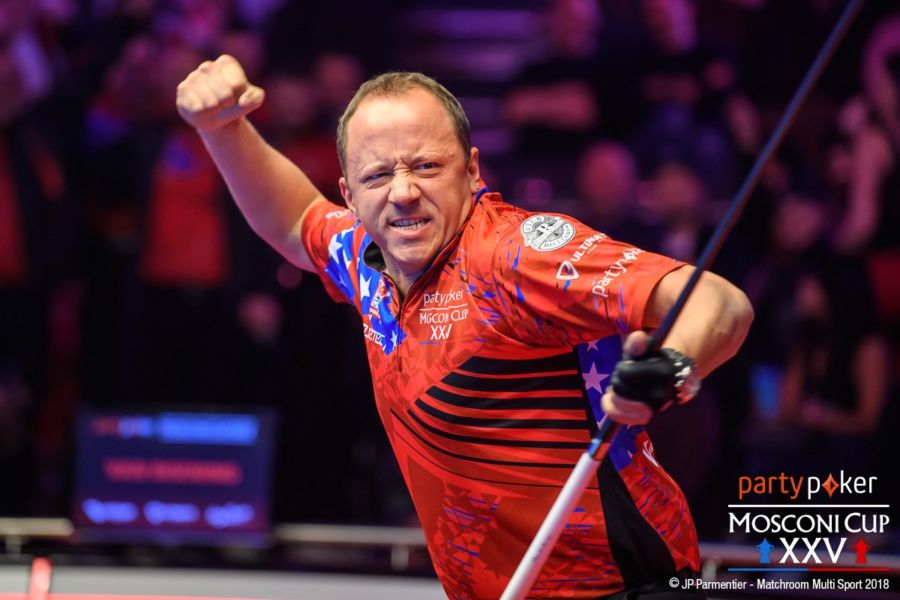 In a thrilling night of pool at Alexandra Palace, Team USA got the better of things to run out 3-2 leaders after the first day of the 25th annual partypoker Mosconi Cup. Lead by former European team captain Johan Ruijsink and his trusted lieutenant Jeremy Jones, the Americans showed plenty of resolve to fight back from 2-0 down in some intimidating conditions at the iconic London venue.

Marcus Chamat, the European captain, will have his mettle tested tomorrow as he attempts to revive his team’s fortunes after a sobering second half of the evening where his team won only four of the 19 racks played.

Ruijsink said, “At 2-0 down I wasn’t panicking; we didn’t really get that many chances. If we did get a chance, though, I knew we’d do better because we’d done better these last couple of weeks and months.”

The opening match of the tournament featured all ten players in the traditional team match and it was Europe who took the point in a game that went all the way. Having lost the opener, the USA needed a strong showing in the next but it didn’t come as Skyler Woodward scratched on the break twice and Thorpe consequently had few opportunities.

That allowed the solid European pairing of Albin Ouschan and Jayson Shaw to coast ahead and complete a nice 5-1 victory to take the score to 2-0.

23-year-old rookie Tyler Styer was sent out into the bearpit next to face four-time MVP Niels Feijen of Holland. Feijen has an outstanding singles record in this event but he couldn’t carry it into this match as the youngster from Wisconsin rode his luck and played with a calmness that belied the circumstances to run out a 5-3 winner.

“It felt amazing out there, I appreciate the crowd – without them we wouldn’t be here,” said a composed Styer to Sky Sports presenter Andy Goldstein.

“It looks good to see my name in red on the scoreboard. I have watched the Mosconi Cup every year since I’ve been playing pool and it is great to be here.”

Ruijsink added, “After 2-0 down you don’t really expect Tyler to beat Niels as he’s a great player. But he turned it around and played great, beating Niels with his own weapons like the jump. And he stayed cool and after that we were flying.

There was more joy for the Americans in the penultimate match as veterans Shane Van Boening and Corey Deuel took down the two European debutants Alexander Kazakis and Klenti Kaci. The Albanian World No.1 didn’t look that comfortable in the vast, packed arena and the American duo took full advantage to complete a 5-1 victory.

That took the score to 2-2 and with Van Boening up next against Jayson Shaw, it afforded the USA the opportunity to take a first day lead for the first time since 2012. And that is what transpired as Van Boening looked a different man from his last few Mosconi Cup outings as he put the hurt on the Scotsman with a 5-0 win to carry the evening in the USA’s favour.

Commented the American captain, “We know our players, we know how good we are and we know our strengths, and we keep supporting each other and helping each other out. After today we can celebrate a bit but we realise that we still need eight more points to win the Cup. Tomorrow the plan is to win the day and play a little bit better.”

European captain Marcus Chamat reflected, “I’m really proud of the guys, they played good. We’re down 3-2 but there’s still a long way to go. We didn’t have luck on our side in a few matches and that’s all it takes. This is part of sport, sometime you win matches and sometime you lose. We’ll try and improve the things we can improve and it will be good if we can win the session tomorrow.”