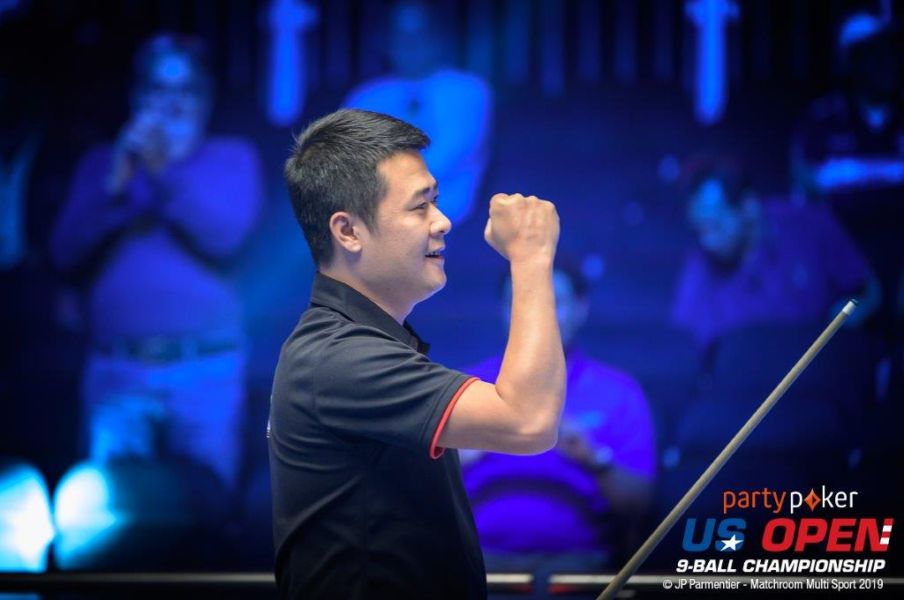 Wu cruised through his quarter-final against Wang Can, who didn’t make a single ball as his compatriot won 11-0. It was a different story for Chang, however, who had to fight back from 9-3 down to knock Liu out of the tournament.

From 2-2, Liu moved quickly into a 9-3 lead but a scratch in the 13th rack of the match showed Chang a path to the comeback trail. The Taiwanese player grew in confidence as he closed the gap, although Liu reaffirmed his grip on the match when he moved to the hill at 10-7 with a brilliant 3/9 carom.

Chang returned to the table one rack later to reduce the gap to two once more, and then benefitted from two turns of good fortune. First, playing a left-handed attempted at a 6/9 combo, Chang missed the rack-winning shot but landed safe. Returning to the table he missed the 6 to the same bottom right pocket and again fell safe.

His luck appeared to have runout, however, when he overcut his third shot on the 6 to leave a straight shot to the middle for Liu. However, that wasn’t the final twist of the rack and two shots later Chang was back at the table, this time making a thin cut on the 8 before pulling the score to 10-9.

Chang then broke dry but then in playing position to the top rail for the 4, Liu left the ball lodged deep in the jaws of the corner pocket. His only choice was to try and jump the point of the pocket, but in doing so he clipped the cushion allowing Chang to clear to the hill, despite leaving himself the thinnest of cuts on the 7 to the middle. Chang then ran the final and decisive rack to advance to finals day.

In the last of the quarter-finals, Wu cruised past Wang, who failed to make a ball in the match. He should have done, though, at 10-0 down. Wu’s break was dry and a straight 1/6 combo was left, with the 1 sat in the jaws of the bottom right pocket. But, having barely had a chance all match, Wang fluffed his opportunity and Wu completed the whitewash.

Play continues with both semi-finals on Friday morning before the race-to-13 final in the afternoon. Players are playing for their share of a $300,000 tournament purse. The winner will take home $50,000, the famous US Open green jacket and the newly-commissioned Barry Behrman trophy.

FILLER TO MEET WU FOR PARTYPOKER US OPEN TITLE