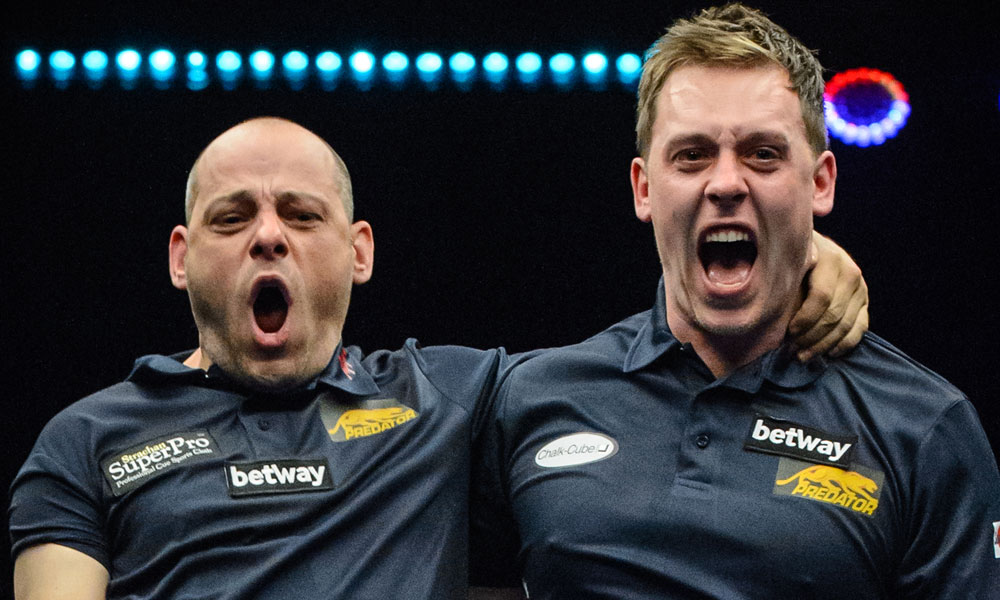 England steal it in final rack!

ENGLAND are the 2014 Betway World Cup of Pool champions after they broke Dutch hearts in a thrilling final rack shoot out where both sides had chances to take one of pool’s most prestigious titles. It was England’s first win in the storied history of the event and gives the two players a $60,000 pay day.

Showing the bulldog spirit Karl Boyes and Darren Appleton came from 3-6 down and then 7-9 behind to force a final rack decider at the Mountbatten Centre, Portsmouth in front of a sell-out crowd.

It was Appleton who broke the last rack of the match, but he could only recoil in horror as the cue ball scratched into the centre pocket.

With ball in hand, Niels Feijen and Nick Van den Berg were big favourites to take the title but with just two balls on the table, it all went wrong. Feijen missed the 8 ball trying to force a better position for the 9.

Boyes came to the table with a table length shot at the 8 but jawed it as the crowd gasped. It rolled behind the 9 which was lying on the rail and when Van den Berg’s bank shot left the 8 out in the open, it was game over.

Appleton said, “I am in shock. The match was really crazy with a lot of mistakes from both teams. We made a silly one in rack two and after that we couldn’t get anything going.

“Holland let us off the hook really and they are going to be sick to lose because they had a great chance to win there. But that is why 9 ball is the most exciting game in the world, because you just never know. And the pressure was just unbelievable.

“I didn’t break well in the match so on the last break I had even more pressure and I told myself just don’t scratch and just spin the cue ball. When I looked at the table I thought we had lost.

“With the pressure you think there is a 10-15% chance that something might happen and luckily for us they didn’t get good shape on the eight ball. It left a tough shot for Karl and he got a good roll and I was able to get the eight ball. I have never shaken as much as that before in my life!”

Boyes, who was in shock after potting the winning 9 ball said, “I was so surprised that they missed that I jumped up with my cue but when I got to the table I saw it was a bit longer than I first thought.

“Darren tried to calm me down and I had a look. I don’t know how close it was or if it was a mile off but I got a nice roll at the end. I have lost a lot of big matches over the last few years when top players have played like God against me so it is nice to get a roll like that.

“We had a chance to go 2-0 up and try and get going but we didn’t get out at 1-0 and we were chasing after that. It was a real dogfight.”

England had beaten Spain, Greece, the USA and Finland en route to the final but were second favourites with sponsors Betway. The Dutch started strongly and always looked to be in control but success in pool is based on small margins and once again they fell at the final hurdle.

“At 9-9 they scratched on the break and we got a huge chance because the table was open,” said Van den Berg.

“There was a lot of heat so we were discussing how to play the 7 ball. It was a tough shot and I followed through when normally I would play it perfectly but it was on the rail and left Niels a very tough shot.

“I know Niels is one of the best jacked up players in the world so I didn’t really worry but there was so much pressure on the shot. I cannot blame him for the miss. Then they missed the eight ball and got very lucky.”

For Feijen it was déjà vue: “This one is pretty frustrating. We should have made it 7-3, so that was a pretty big moment. Instead it went 6-4 and they made it 6-5 and then it is back to grind mode.

“If you got 7-3 you might steamroll the match, so I was pretty disappointed not to go further ahead at that moment. In the end, it was just a quarter of an inch, that is it. But that is how it goes in pool.”

Betway WCoP: As It Happened