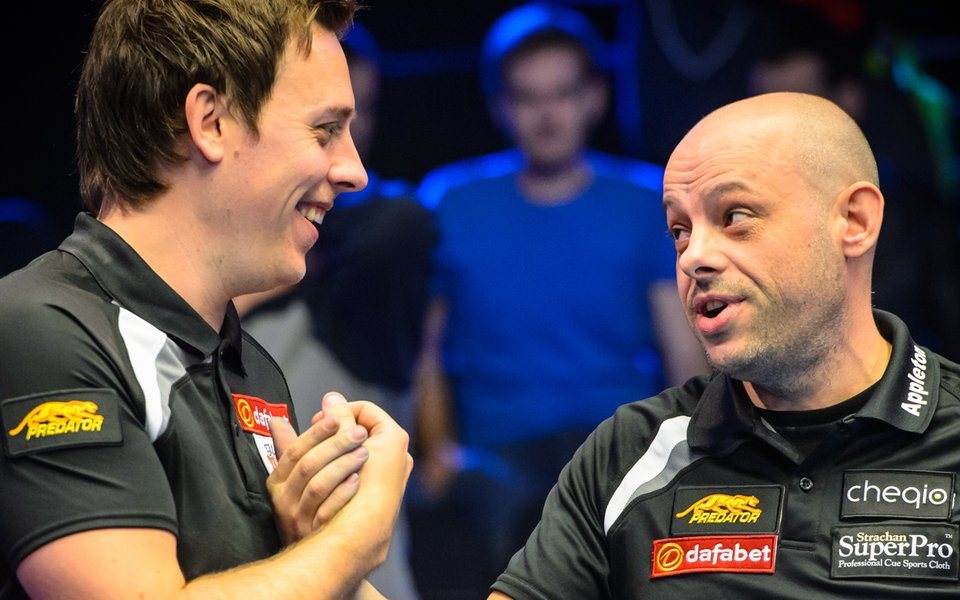 DEFENDING CHAMPIONS ENGLAND A safely made their way through to the second round of the Dafabet World Cup of Pool but they had to come from behind to overcome a game Australian pair of Robby Foldvari and Chris Calabrese to do so. In other Tuesday night matches, former champions Germany were dumped out of the event by an amped-up Indonesian team and Austria took care of Peru by a 7-5 scoreline.

After an afternoon of seeds falling, Germany were the next ranked team to be taken to the cleaners as the confident Indonesian pair of Bewi Muhammad Simanjuntak and Irsal Nasution got the better of them by a 7-3 score-line. Despite their lofty seeding of 9, the German pair of Ralf Souquet and Thorsten Hohmann was never at the races as the Indonesians moved into a 4-1 lead.

That soon became 6-2 and despite the Germans taking the ninth game it was to be their final contribution to the match.

A delighted Muhammad Simanjuntak, “In the first match there is always a bit of pressure but we have had very good preparation for this tournament. Our plan was to just enjoy the games and do our best. Nine-ball is a game where anything can happen, like Romania beat China earlier today.

“Germany is one of the best. Ralf Souquet and Thorsten are both World champions but we are newcomers. I like to play aggressively, and I also like to play in front of the crowd and in the TV arena.

“We watched Romania earlier. They played well but if we play like we did tonight, we can beat them. They didn’t give China many chances but I am confident we can beat them because we have been breaking well.”

Defending champs England A survived a scare against Australia who have yet to record a win in ten attempts at the World Cup of Pool. The Australian pair of Robby Foldvari and Chris Calabrese, both debutants in the competition, had looked in good shape as they overcame a 4-1 deficit to claw their way back into a 5-4 lead.

The English pair was clearly frustrated by the way the match was heading but they dug in and took the next three racks for the win as the Australians faded. It was a good win in the end and the 7-5 win stemmed the glut of seeds leaving the competition.

“The feeling is relief”, said Appleton after the match.

“There have been a lot of shocks today so we were going into the match not taking them for granted. We played well to go to 4-1 and then came to the table twice and we were snookered both times and then we were 5-4 down and under a lot of pressure.

“The last thing you want to do is go out in the first round but I am proud of Karl and myself because we came here not playing well but the way we finished that match will give us a lot of confidence.

“The first win is massive. We aren’t stupid, we know there are a lot of good teams here and in the early stages of the tournament it is short races. Our goal was to get to the quarter-final when it gets to race to nine and then from there we know we have a good chance.

“I am so happy we played well because if you had seen us last week you wouldn’t have believed it. But I think we are the type of guys who need the big stage to bring out the best in us.”

Boyes added, “We didn’t come here with a lot of confidence but this is live TV and you want to play well and we have both played in Mosconi Cups and we are defending champions, so you rely on that experience.”

The final match saw last year’s semi-finalists Albin Ouschan and Mario He (Austria) hold off a solid Peruvian pairing to advance to the second round. After advancing into a 5-1 lead, the Peruvians – Manny Chau and Cristopher Tevez – made a fight of it, getting it to 6-5 before losing the table and then the match in the ultimate rack.

“It was a pretty good match; they made some mistakes early in the match and we took the chances to take the lead,” said Ouschan.

“I have had a good year in singles but singles is different because doubles you have to think about your partner; he might like some shots more than I do. Last year we came third here and this year we will do our best and see what happens.”

No upsets as WCoP action continues