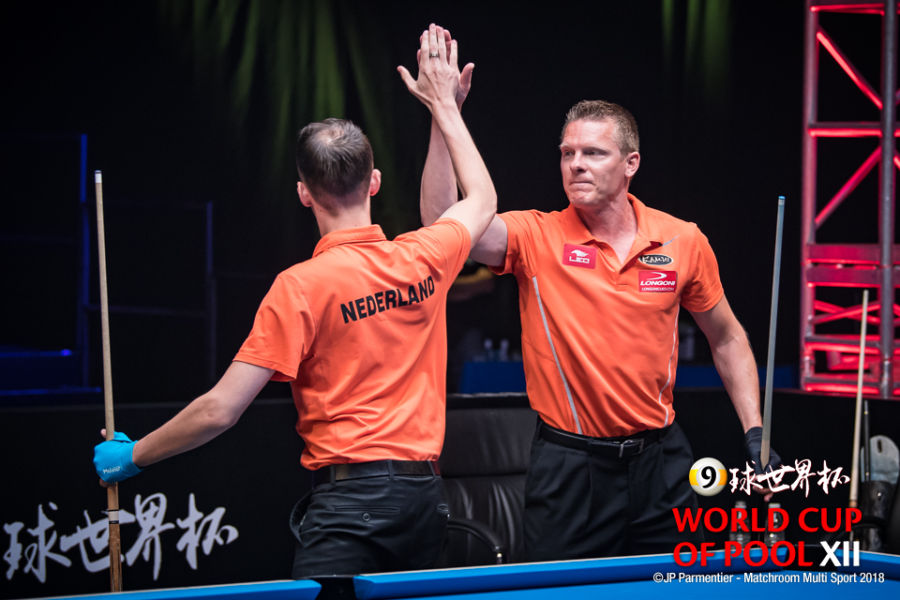 The 2018 World Cup of Pool got underway this afternoon at the Luwan Arena, Huangpu District in Shanghai, as the event moved to China for the first time in its illustrious history. The defending champions were the Austrian pair of Albin Ouschan and Mario He who had defeated the USA in London 12 months ago and they opened proceedings with a first round match against Chile.

The $250,000 tournament originated in 2006 and has since moved around the world before touching down in Shanghai. The World Cup features 32 pairs from around the globe including two from host nation China. Running from 15th to 20th May, the event is live in over 100 countries around the world.

The Chilean pair of Enrique Rojas and Alejandro Carvajal who travelled the longest and furthest to reach the event moved into a 3-0 lead against the No.1 seeds. Austria though, steadied the ship and while they didn’t look their best rallied to get back into the game and eventually ran out comfortable winners.

Poland, runners-up in this event in 2012, featured the pairing of experienced Mateusz Sniegocki and 17 year-old wonderkid Wiktor Zielinski. They came through their match against Kuwaiti pair of Mohammad Sale and Bader Al Awadhi but not before the Middle Easterners had given them plenty to think about.

Commented Sniegocki, ““We are glad with the victory but we should play a little bit better, so I hope in the next match we will show our better skills. Wiktor is one of the best young players in Europe so I feel I have great back up in him.”

Zielinski said, “It is good to win. This is my first big event, organised by Matchroom Sport, I have never played in a tournament like this before. I felt pressure in the beginning but after three frames I felt more comfortable and played better but I still made too many mistakes.”

In the final match of the session, two-time World Cup of Pool runners-up Holland, made it through to the second round at the expense of Thailand who battled hard but were undone by an unlucky scratch with the scores poised at 6-5. The Dutch were lead by the redoubtable Niels Feijen and he was joined by Marc Bijsterbosch making his debut in the event.