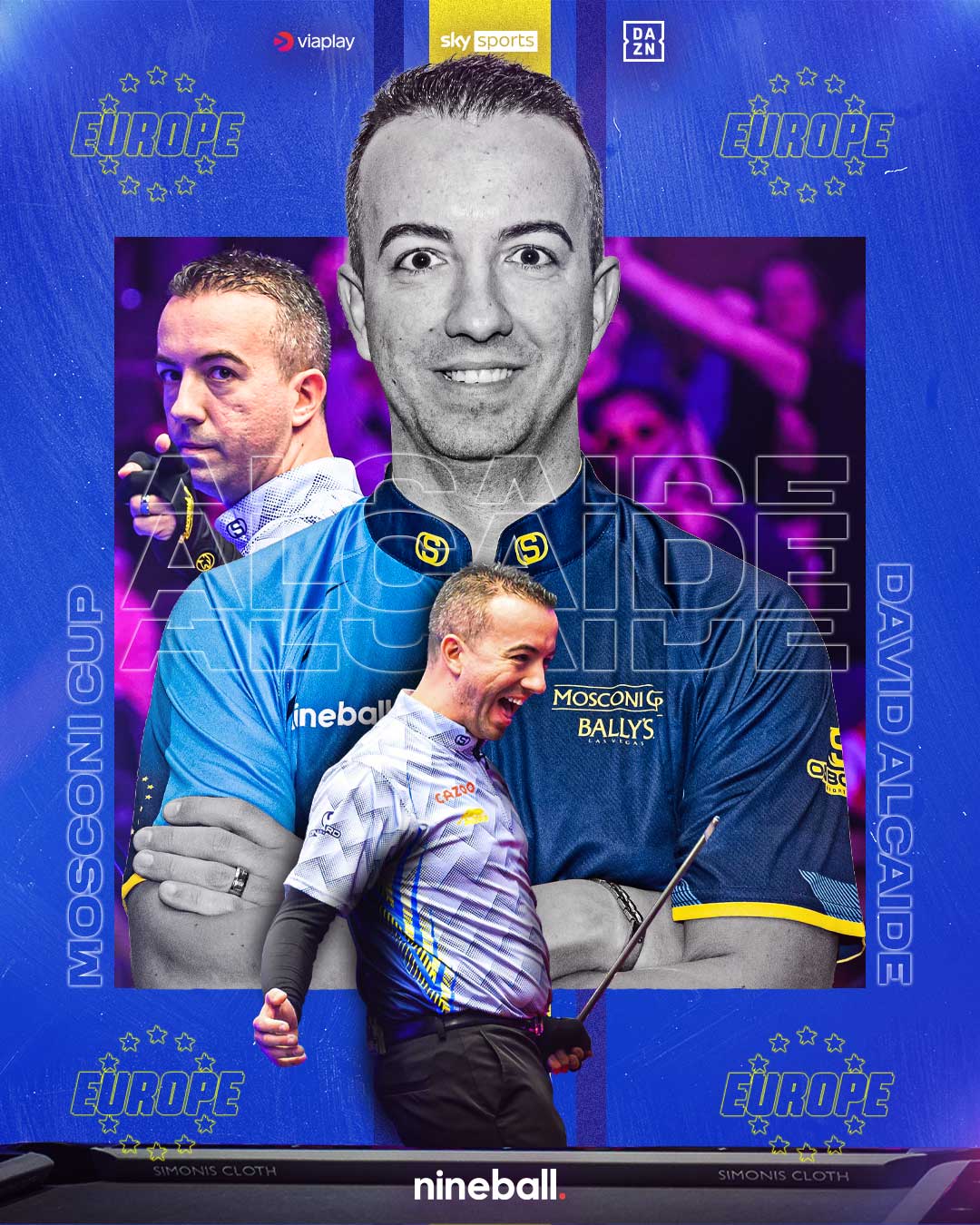 David Alcaide has completed Team Europe side for the upcoming 2022 Mosconi Cup set to take place at Bally’s Las Vegas, live on Sky Sports, from November 30 to December 3 as well as on DAZN in the USA, Canada, Spain, and Italy and on Viaplay in Scandinavia, the Baltics, and Poland.

The 2022 World Cup of Pool winner joins his winning partner Francisco Sanchez Ruiz, Joshua Filler, Albin Oushcan, and Jayson Shaw as the final wild card pick for Alex Lely’s European side ahead of reigniting pool’s biggest rivalry with the USA next month.

Alcaide has been on the winning sides in two of his three appearances including last year and the last time Europe won in Sin City five years ago. He will link up with compatriot Sanchez Ruiz for Europe for the first time.

The Spaniard cannot wait to return to the side alongside Sanchez Ruiz for the first time: “It’s impressive how you feel when you’re in the team, it’s very difficult to express, it is a dream come true every time, and even more so having the opportunity to play alongside my brother Francisco. It is a dream of both of ours to make it together and now we have done it and we will give our maximum for the team”

Alcaide added: “Playing together in the Mosconi Cup is something we have always dreamed of and for which we have worked very hard, and we are not going to miss this opportunity, we are going to give it our all to bring the cup back with us to Spain.”

Last year saw Europe come from behind to seal an 11-6 win with Alcaide at the heart of the victory securing 2.5 points for his team across singles and doubles action only being pipped by Shaw to the MVP crown: “the first one is very special (2006) but last year in London, which was my first time there, it was unique, this year will be better in Las Vegas. It’s a place I have fond memories of and I hope to make more come December 3.”

Lely is looking forward to the return of Alcaide on his side: “David is intense and he has a lot of heart. It’s nice to watch him when playing so well. He was one of the leaders in the team last year. It’s his age and experience but also his passion for the game and the passion he has for life. He is passionate to help others. He’s been the big brother of Francisco Sanchez Ruiz. It’s a bit like Batman and Robin. He’s a social guy and he doesn’t hold back. I picked him because he ticks so many boxes in the team. I believe his game is there. With his seniority, his experience, and his ability to stand tall in adversity, I think in Las Vegas we will be needing that. I appreciate what leadership he brings.”

“When you look for a fifth pick, you look for his level of play but also how he blends into the team. With FSR in his first Mosconi Cup getting his World Cup of Pool partner in there together will help him but I also think it’s important for the whole team to get another leader on board, a seasoned player who has the ability to carry others.”

Team USA now have the last remaining wild card to complete their side after Tyler Styer joined world number one Shane Van Boening, Skyler Woodward and Oscar Dominguez on Jones’ side. Make sure you stay tuned to the Matchroom Pool social pages to get the latest news as Mosconi Cup news drops including the final American pick. Facebook, Instagram, and Twitter.

EARL STRICKLAND OUT FOR REDEMPTION AS FINAL WILD CARD PICK