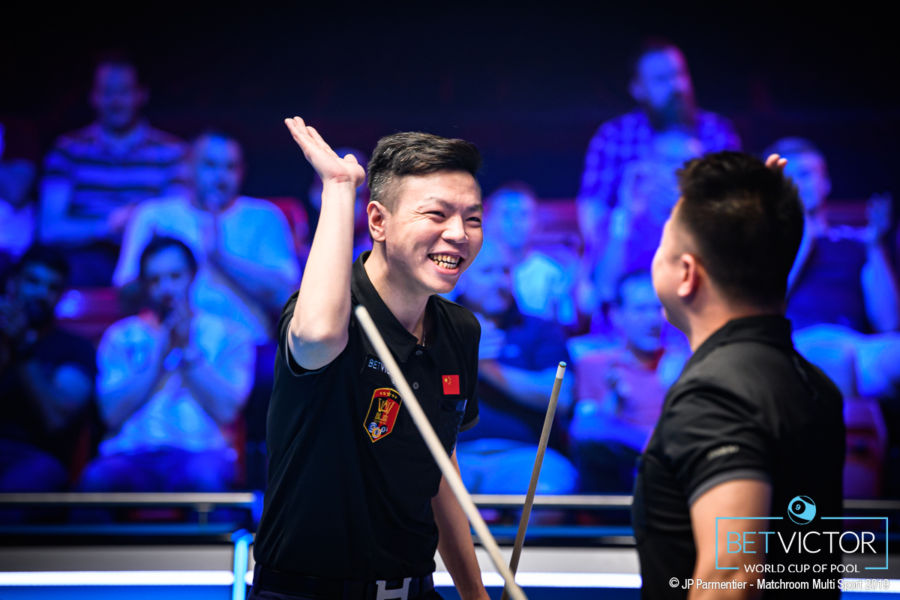 Defending champions China survived a huge scare against Chile in the second round of the BetVictor World Cup of Pool, eventually progressing to the quarter-finals with a 7-6 victory at the Morningside Arena, Leicester, live on Sky Sports, DAZN and networks worldwide.

The Chilean pair of Enrique Rojas and Alejandro Carvajal had taken an early 2-0 lead before being pegged back by China (Wu Jiaqing and Liu Haitao), Wu making a golden break before the defending champions levelled.

Latin American champions Chile, though, we’re unperturbed and worked their way to a 5-3 lead. At that stage they looked set to reach the hill but Carvajal made a mess of the 7 ball, and China were back to within one. It was the turning point China needed. In the next rack it was Chile’s break, one which could have been golden as the 9 sat up in the corner pocket but nothing fell and China had the table.

The combo wasn’t immediately available but after taking down the 1, 2 and 3 the 4/9 presented itself and China were level. They ran the following rack to reach the hill, making it four in succession and looked to be closing out the match until Liu left the 8 hanging over the pocket, setting Chile up to give a fitting conclusion to a match which defined the phrase ‘hill-hill thriller’.

It was China to break in the decider and Liu had the 1 down. Wu then made a powerful 2/6, the table opened up, and the defending champions progressed by the skin of their teeth.

The second last-16 match saw Netherlands (Niels Feijen and Marc Bijsterbosch) up against 2017 runners-up Shane van Boening and Skyler Woodward of America. USA took the first two racks but their opponents took the next two. The Dutch then moved two ahead themselves at 5-3, capitalising on a Woodward scratch in the eighth. Two-time World Cup runners-up Netherlands were in clinical form and took advantage of another American mistake – this time from Van Boening – to go 6-3 up and when the US No.1 left a 3 hanging in the subsequent rack, Netherlands cleared for the match.

In the last of the first-round fixtures, Spain looked on the ropes before eventually defeating Australia 7-5. Australia had raced into a 2-0 lead and extended that after Sanchez-Ruiz left the 9 in the jaws. They could have gone further ahead but Stone played poor position leaving Sajich a tough 9. He tried to double bank it but left the shot on for Sanchez-Ruiz, who made a pivotal pot for Spain, only for Australia to re-establish their three-rack lead.

A break and run settled things again for Spain and they followed it up with two more successful racks to level at 4-4. Australia regained their advantage and looked set to get to the hill until Sajich missed the 7. The cue settled behind the 9 and Alcaide attempted the jump. At that stage the luck Australia had on their side switched allegiance. World Pool Masters champion Alcaide missed the pot but the 7 travelled to the centre of the table where it kicked the 9 into the middle pocket, and rather than being 6-4 down, Spain were all square.

Australia then broke dry and as Sanchez-Ruiz made the 1, again the 9 took a kick and sat in the jaws of the corner pocket, giving Alcaide a 2/9 carom which took Spain to the hill, and breaking for the match.

Spain’s cue ball control wasn’t as tight as they might have liked in the final rack and a tough position on the 7 forced an error from Sanchez-Ruiz. Stone had to cut it, and with the shot clock ticking down was forced to rush his shot. He made the object ball but the power on the cue ball sent it off the top rail and to the bottom right pocket, scratching to give Spain a place in the last 16.

The BetVictor World Cup of Pool is broadcast live in over 100 countries around the world, including on Sky Sports and DAZN.

Two Former Champions Through At BetVictor World Cup Of Pool