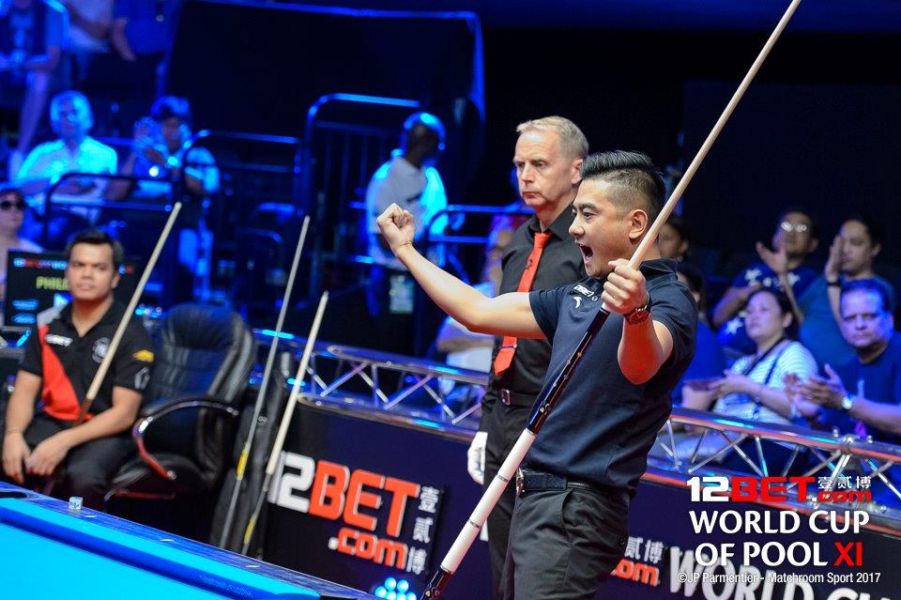 CHINA AND AUSTRIA completed the semi-final line-ups of the 12BET World Cup of Pool as they won in contrasting styles at the York Hall this evening. The Chinese pair romped home in superb style, giving the Philippines little table time in their 9-2 win, while Austria gutted it out against England B in an error-strewn affair. The arena was very hot with table-side temperatures in the 30s and it certainly impacted the tempo of play.

Featuring 32 two-man teams from around the globe, the 12BET World Cup of Pool is into its 11th year as reigning champions Chinese Taipei attempt to become the first team ever to successfully defend the title in the $250,000 event.

In the opening match, China looked in unstoppable form as they trounced the Philippines 9-2 to reach the semi-final where they will face Austria. The duo of Wu Jiaqing and Dang Jinhu were flawless as the controlled every aspect of their game to leave the Philippines as mere spectators for most of the time.

China are the two-time winners of this event in 2007 and 2010 – both with Li Hewen and Fu Jianbo – and they looked a solid bet to make it three at the York Hall tomorrow.

In the second semi-final, it was Austria who prevailed in a match where neither team was at their best and scrappy play was often the way. No team really had a hold of the match – Austria lead 2-1 and 6-3 before England pulled it back to six-all and then took the lead with an excellent run out from the break.

They couldn’t make the next break pay, and it was Austria who then took the initiative as they won that and the next two for the match.

Commented Mario He, “We had a lead 6-3 and gave it away. It should have been an easier win but we are happy that we still won it.”

Ouschan added, “We started pretty good and felt awesome but at 6-3 we couldn’t see the 1 from the break and something changed. So, we are a bit disappointed but we managed to get the win in the end. We will talk about it and see what we can do differently.

For England’s Daryl Peach, a runner-up in the event last year, it was sheer disappointment, “We knew Albin was struggling, he was making quite a few mistakes. They broke and ran three racks to go 6-3 up but we waited for our chance, it came and we did everything right up until 7-6 up and I have missed the four and we didn’t get a shot after that.

“The table is playing well but the heat in the arena is difficult. I wish I had worn a glove – I don’t wear one because you can’t feel the cue on your hand. Some players like it, some don’t, but it definitely benefits in this heat if you wear a glove.

“I thought we were capable of achieving more and going further so it is disappointing but that is sport and we will both bounce back.”

Play continues on Sunday afternoon with the two semi-finals: