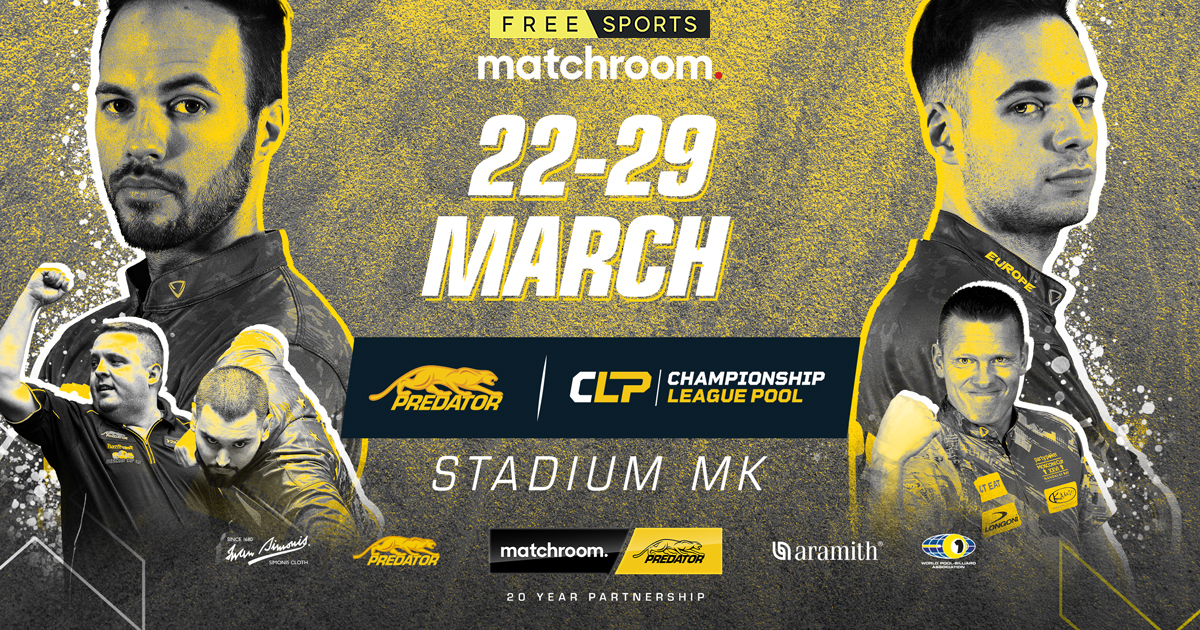 FreeSports will be the home of Predator Championship League Pool in the UK & Ireland this March 22-29, Matchroom Multi Sport is pleased to announce.

Broadcasting free to over 20 million homes, as well as online at freesports.tv, FreeSports is available on Freeview as well as to all Sky, Virgin, TalkTalk TV and BT TV customers.

FreeSports has recently been the home of Championship League Snooker. The successful broadcast partnership has seen hundreds of thousands of fans tune in to see the likes of Ronnie O’Sullivan, Judd Trump and John Higgins in action.

FreeSports will air ten hours of live action daily, with full and uninterrupted coverage of 12 matches per day from Table 1. Players include World Champions and Mosconi Cup winners such as Darren Appleton, Joshua Filler and Albin Ouschan.

Emily Frazer, Managing Director of Matchroom Multi Sport, said: “We are thrilled that our brand-new Predator Championship League Pool event will be live for all eight days on FreeSports, giving millions of fans across the UK and Ireland free, uninterrupted coverage of our exciting new event.

“Predator Championship League Pool brings the world’s best players together in quick, short-race matches which guarantee drama. This is the best versus the best in quick, action-packed matches and we cannot wait to get started.

“We’ve enjoyed a successful partnership with FreeSports for Championship League Snooker, with record-breaking audiences tuning in to see the best snooker pros in action and we are delighted that we can now bring Predator Championship League Pool to such a wide audience across the UK and Ireland.”

Richard Sweeney, CEO of FreeSports and Premier Sports commented, “This is fantastic news for all Pool fans living in the UK with a huge amount of live action across eight days all on FreeSports. We’ve previously broadcast an extremely successful Champions League Snooker tournament along with Matchroom Multi Sport and only delighted to bring more live and free coverage to viewers.”

Predator Championship League Pool has a prize fund of $85,950. Every day features a seven-player group, with each player facing every other player once in a race-to-5. At the end of the group the top four will advance to the play-offs, playing a semi-final and then final, also played as race-to-5. Play-off champions will advance to the big-money Winners’ Group on March 29, which will provide the showpiece conclusion of Predator Championship League Pool.

Players who finished bottom of each group are eliminated from the event, while the remaining five players in each group will continue to the next day’s play, where two new players enter the tournament. Players to enter Groups 2-7 will be confirmed next week.

FreeSports is a sister channel to Premier Sports who cover all 152 games of the Guinness PRO14, Serie A, the home of knockout Scottish Cup Football, LaLigaTV, Boxing from around the globe on BoxNation, 500 games from the NHL & the NASCAR Monster Energy Cup Series. Premier Sports is available on Sky, Virgin TV and online via the Premier Player.