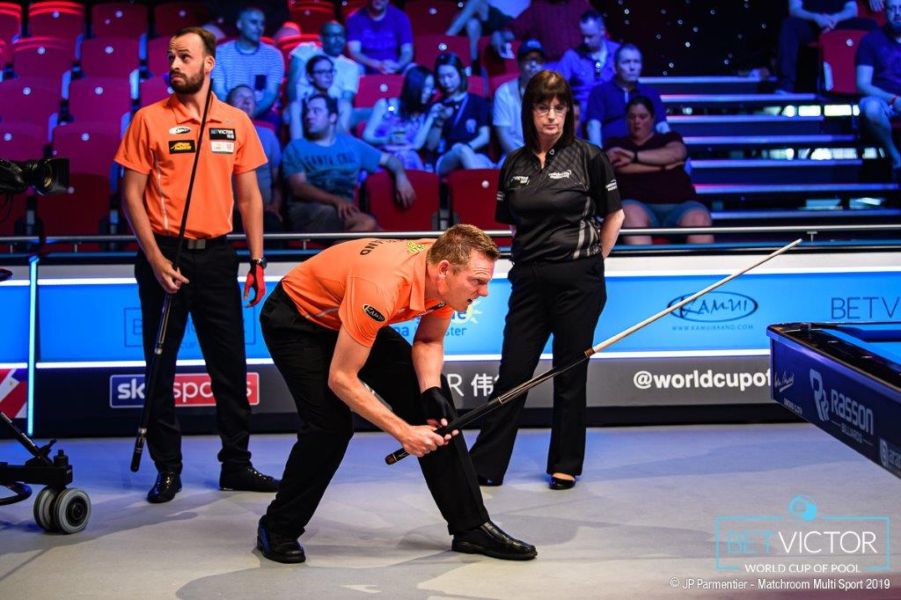 Champions China Crash Out Of BetVictor World Cup of Pool

Defending champions China have been knocked out of the BetVictor World Cup of Pool after losing their quarter-final clash with Netherlands 9-5 at Morningside Arena, Leicester, live on Sky Sports, DAZN and networks worldwide.

It remains, therefore, that no team has ever been able to successfully defend their title and Niels Feijen and Marc Bijsterbosch will go on the play the Philippines in Sunday afternoon’s first semi-final after the three-time winners defeated Canada in their last-eight encounter.

After six racks China and Netherlands were locked at 3-3 with neither losing from their own break but in the seventh the Dutch took the lead after China had the opening shot and in the very next rack Feijen made it a two-game lead with a golden break, the third of the tournament.

The Dutch duo opened up an even greater lead when they moved 7-4 ahead, and though China (Wu Jiaqing and Liu Haitao) narrowed the gap, Netherlands reached the hill 8-5 up.

Bijsterbosch had the break but Feijen needed to play safe on the 2 and Wu made an impressive jump to bank the object in response. However, Haitao’s subsequent jump to reach the 3 sent the cueball off the table and the Netherlands were in for the win.

“We are extremely happy, of course,” said Feijen, twice a finalist at this event. “We are happy to be back in the semi-finals. We are gelling incredibly well and Marc is a brilliant player, so I am looking forward to tomorrow.”

Canada raced to a 4-1 lead but Philippines fought back and took six consecutive racks. The Canadians looked set to stop the Filipino momentum until Pagulayan got a tough roll in making the 4. The cue ball kissed the 9 into the jaws of the right corner pocket and scratched to the left, leaving De Luna aneasy 5/9 to get to the hill.

Canada finally got their fifth the following rack but it didn’t spark the revival they wanted and Philippines expertly ran the next to make the semi-finals.

The remaining two quarter-finals take place from 6.30pm this evening as Greece take on Austria and Spain come up against hosts Great Britain. The BetVictor World Cup of Pool is broadcast live in over 100 countries around the world, including on Sky Sports and DAZN.

Hosts Out As Spain And Austria Make Semis