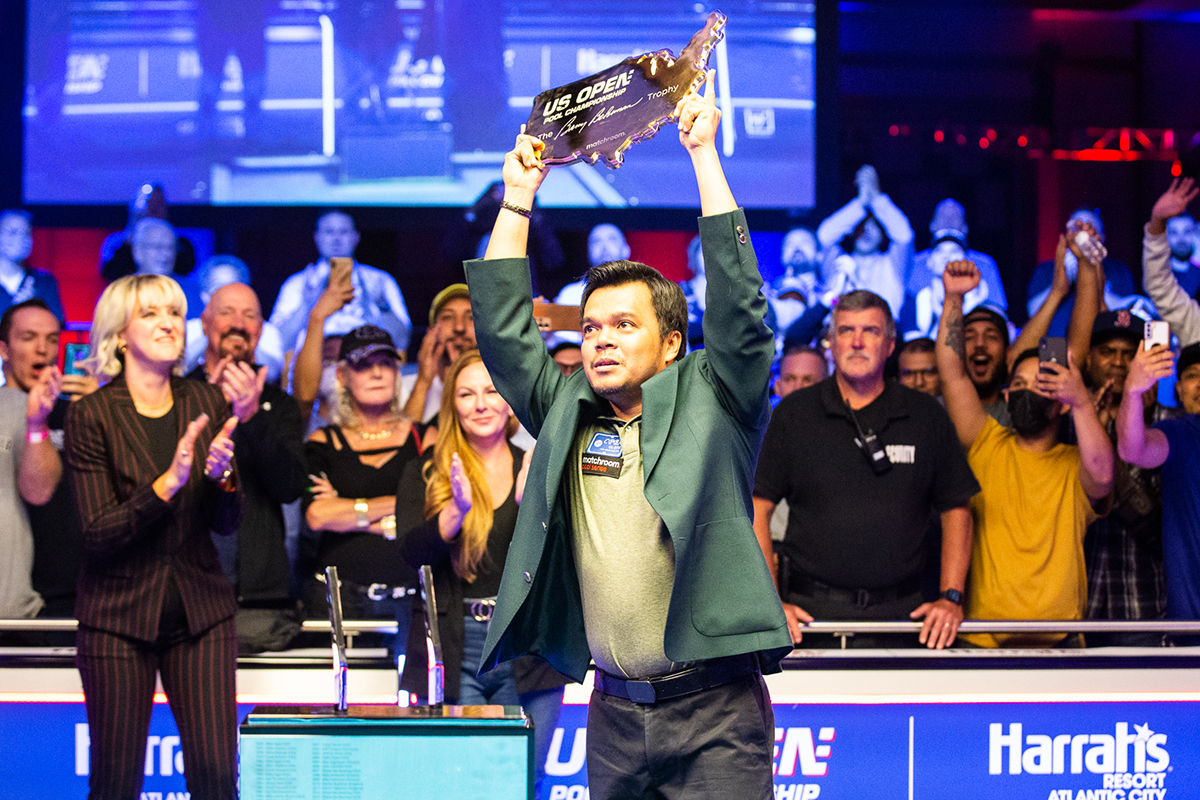 Biado started the final the strongest of the pair going into a quick 2-0 lead with back-to-back break and runs. The Filipino got the crowd going in the third after jumping the four to cut the one in, but it was Yapp who took it to trail 2-1 early on.

Yapp broke in the fourth but struggled for any position off it leaving a simple 1 2 combo to allow Biado the chance to run the rack and have the break in the fifth. It was Biado’s turn to find himself stuck off the break and Yapp was soon back at the table where he executed the perfect table length bank on the 2 as he cut Biado’s lead to one rack.

As ever in the tournament so far, Yapp never looked fazed by his opponent’s pedigree racing into a 5-3 lead to put some breathing space between the pair for the first time in the contest. In the ninth rack it was all about safety as they did battle early on before eventually, Biado drew a foul from Yapp.

Yapp began to put daylight between the pair putting Biado in all sorts of trouble in the 10th rack where the two were tied up by the seven and with that Yapp lead 7-3. Yapp soon missed the nine which could’ve made it 9-3 and that’s when the contest turned entirely in Biado’s favour.

Biado ran the following two racks after the nine to only trail by two at 8-6. A pivotal moment coming in the following rack where Biado jumped the six effortlessly to pocket the one and soon pull it to 8-7. It was Biado’s fifth successive rack to make it eight all and soon Yapp was staring down the barrel of defeat.

Perhaps left cold after being sat at his corner for a while, Yapp had his chance when tied but he drew the cue ball the length of the table on the two scratching and allowing Biado to the table to take the lead for the first time since being 3-2 up.

At 10-8 up, Biado once again broke out the jump cue to pocket the one expertly and the bags of experience showed as he closed out the contest.

Everything was relatively plain sailing for Biado from there on getting onto the hill before missing what could’ve been a costly 1 9 combo in what was ultimately the last rack as Biado became the first Filipino to win the US Open Pool Championship since Efren Reyes.

Yapp said: “I am lost for words. I feel grateful to be in the final and all the fans have been awesome so thank you. I know I can do it; I am coming back stronger next year.”

Biado was elated with his win and struggled to hold back the tears: “I am very happy because this event is one of my dreams. I dedicate this to my family and to my baby. Thank you to all of you even during the pandemic you’re still here watching around the world. Thank you to Matchroom, my sponsors, and all of the Filipinos who support me always everywhere.”

YAPP AND BIADO TO CONTEST US OPEN FINAL

Alcaide: It’s the best feeling when you play in the Mosconi Cup