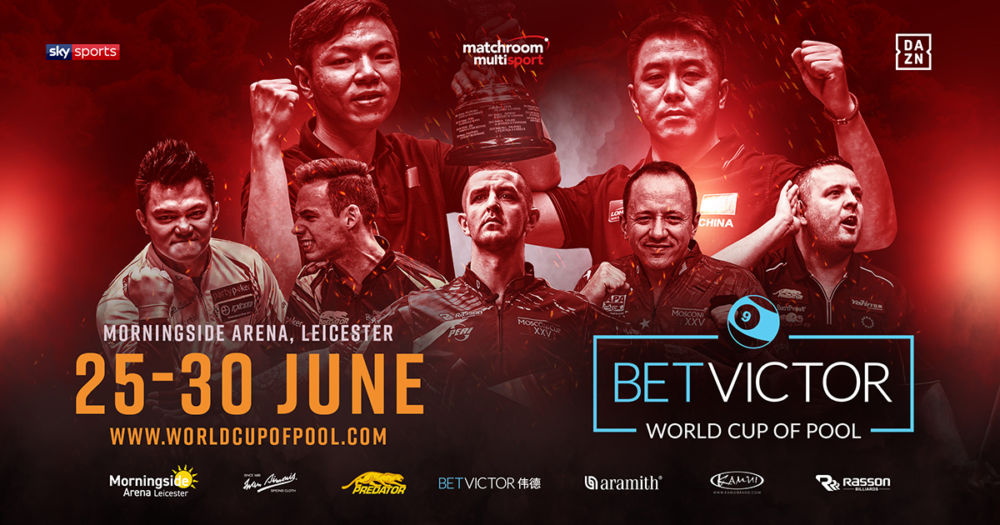 Matchroom Multi Sport is delighted to announce that BetVictor, a leading online gambling company, will title sponsor the 2019 World Cup of Pool, taking place at Morningside Arena, Leicester from June 25-30.

Bringing together the world’s best players in 32 two-men teams, the World Cup of Pool is one of nine-ball’s major events and will be broadcasted live globally on networks including Sky Sports and DAZN.

Matchroom Sport Chairman Barry Hearn, said: “We are thrilled to welcome BetVictor as title sponsors of the World Cup of Pool. We have a great relationship with BetVictor across the Matchroom Sport group and are delighted they will now extend their support into pool”.

“The World Cup is one of the stand-out tournaments in the nine-ball calendar, featuring the very best players from around the world representing their countries in one of pool’s majors. China were winners last year but such is the strength of competition that no team has ever been able to successfully defend the World Cup, and with so many huge names in the field we know we are set for a spectacular tournament” added Hearn.

Director of Sportsbook at BetVictor Matt Scarrott, said: “Our relationship with the PDC is going from strength to strength with many successful sponsorships, so it made sense for us to further extend our partnership with the PDC by endorsing the World Cup of Pool”.

“The sport is becoming more and more popular, which is noticeable by the increasing number of spectators following pool tournaments on TV and social media, and this will enable us to reach a wider audience” added Scarrott.

China’s pairing of Wu Jiaqing and Liu Haitao are defending champions after battling past the likes of Spain, Chinese Taipei and Austria to lift the trophy in Shanghai last year. But they’ll have to fend off competition from powerhouse nations such as Philippines, USA and Great Britain if they are to become the first country to successfully defend their World Cup of Pool crown.

Tickets for the 2019 World Cup of Pool are on sale now on https://matchroompool.com priced at £5 for weekday afternoons and £10 for weekday evenings and weekend sessions. A season ticket is available for £75 with premium ticket packages available for weekend days including food and unlimited beer, wine and soft drinks.

The 2019 World Cup of Pool features 32 two-player teams battling for the $60,000 first prize from a total prize fund of $250,000. Matches are race to seven in the first two rounds, race to nine in the quarter and semi-finals and, for the first time, race to 11 in the final.

About BetVictor
BetVictor is a leading global online gambling company. Its focus is to offer customers a simple, intuitive and personal betting experience. Digitally data-led, BetVictor provides in-house technologies and product development capabilities enabling the company to build successful partnerships. With more than 500 employees, BetVictor is an established innovator in the gambling industry.

BetVictor is the headline sponsor of Cheltenham’s November Meeting including the feature BetVictor Gold Cup.

Established in 1946, Michael Tabor acquired sole-ownership of BetVictor in 2014 having previously been a major shareholder in the business. BetVictor has its headquarters in Gibraltar with tech hubs in London and Budapest. For more information, follow BetVictor on Facebook, Twitter and Instagram.

To learn more about BetVictor visit us on LinkedIn.

WORLD CUP OF POOL LIVE ON DAZN IN AMERICA