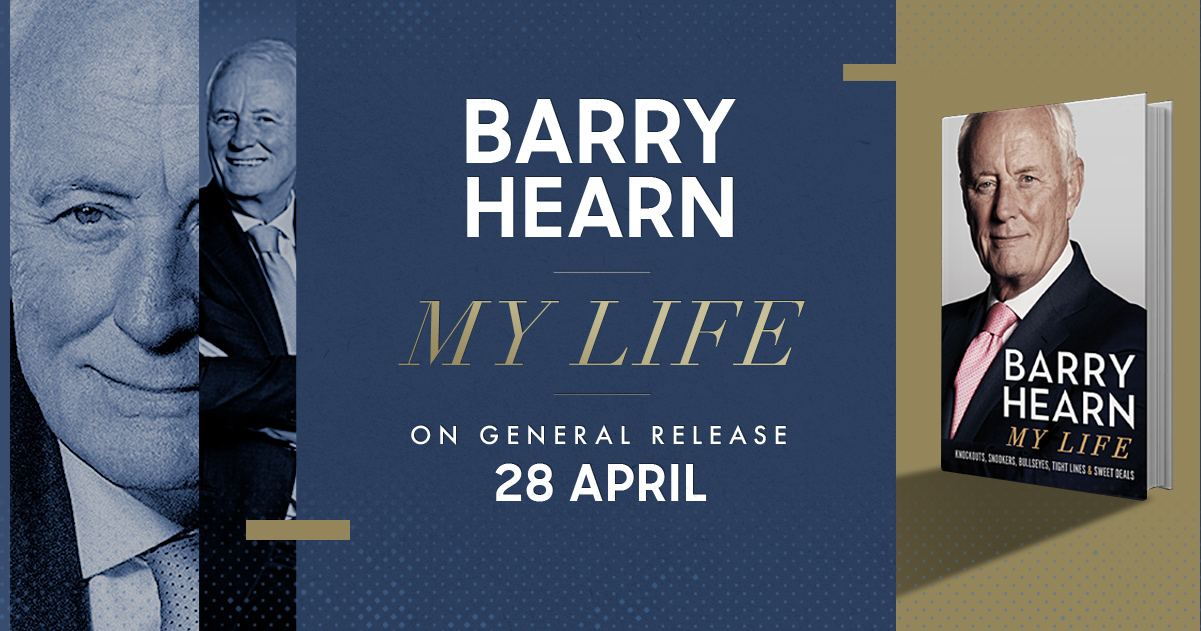 Hodder and Stoughton have snapped up the autobiography of legendary sports promoter Barry Hearn.

Senior Commissioning Editor Huw Armstrong acquired World Rights in My Life direct from the author. The book will be written with journalist Nick Pitt. Hodder & Stoughton will publish on April 28th 2022.

Born in a council estate in Dagenham, his journey to the top has been remarkable. In a career spanning four decades, Barry Hearn has shaped modern sport and has been responsible for many of the biggest sporting moments this country has ever seen. Largely responsible for the snooker boom in the 1980s, Hearn has played an important role in the development of the sporting landscape in Britain. When he became chairman of the Professional Darts Corporation, he oversaw the most successful period of growth in the sport’s history, with prize money now currently heading towards £20M per year. After founding Matchroom Sports – a unique TV sport promotion company – Hearn subsequently put boxing, darts and many other sports like fishing and poker, on the map. He was also the owner of Leyton Orient for 19 years, saving them from financial disaster.

In My Life, Hearn looks back at some of the moments in his life that made him. With his inimical, no-nonsense delivery, Barry brings us a story filled with humour, passion, and good sense, taking you inside every drama of his illustrious career. From his power struggles with media moguls and boxing promoters, to his vital role in the careers of Davis, Eubank, Phil ‘The Power’ Taylor, Ronnie O’Sullivan and a host of other champions, Hearn’s story is one for the ages.

Packed full of never-before-heard stories, and wonderful encounters with a colourful array of characters, this is an unforgettable and unique story of a legend in the game.

Barry Hearn says: “It has been an absolute pleasure to chronicle my life and in particular my career in various sports.  I hope this book will educate and entertain readers by following my journey as my company Matchroom evolves from just me and a PA under a billiard hall in Essex, into one of the biggest and most successful sports promotion companies in the world. Enjoy the journey.”

Huw Armstrong says: “There’s a point in this book, a few pages in, when you realise just how much Barry has achieved. It’s insane. Barry changed the game. Ripped up the rulebook and provided an outlet for sports like darts, snooker and boxing that simply didn’t exist before. It should come as no surprise, then, that he can also tell a story. He’s had a hell of a life and this book is a real joy from start to finish. The only thing to really say is this: read it.”

Barry Hearn OBE qualified as a Chartered Accountant in 1970 and spent several years with a major firm of international accountants. In 1974, he became chairman of Lucania Snooker Clubs and began to involve the snooker-hall chain in amateur tournament promotions.

In 1976 Steve Davis began playing at the Romford Lucania Club and the two struck up a partnership which transformed the world of snooker.

With the formation of the Matchroom organisation in 1982, Hearn managed most of the world’s top snooker players and promoted the sport around the world. He subsequently developed Matchroom Sport as global promoters and TV producers of boxing, darts, pool, netball, golf and a host of other sports.

WORLD CUP OF POOL | TICKETS ON SALE FROM ONLY £10