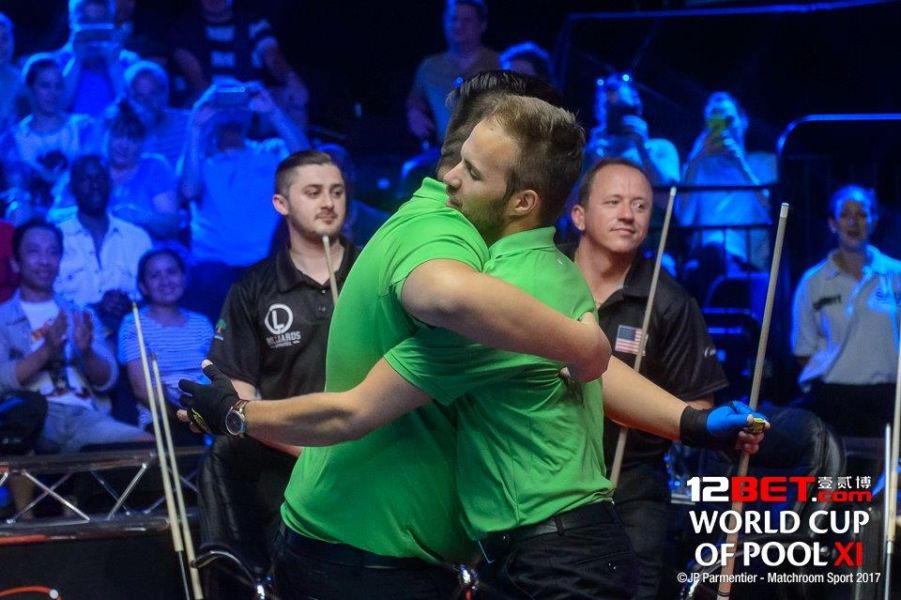 AUSTRIA HAVE WON the 2017 12BET World Cup of Pool as the duo of Mario He and Albion Ouschan secured the title against Team USA, who had their moments but ultimately could not contain the Austrians.

Winning the prestigious scotch doubles title for the first time, the Austrians secured the magnificent trophy, gold medals as well as $60,000 to split. Although disappointed, Shane Van Boening and Skyler Woodward can console themselves with a cheque for $30,000 and the added bonus of playing so well as a team ahead of the 2017 Mosconi Cup in December.

Earlier in the day both teams had assumed the underdog role in their semi-finals but won through, with Austria beating China and the USA getting the better of Chinese Taipei.

That set up the race to 10 final which got underway in sweltering conditions in the famous York Hall in the heart of London’s bustling East End.

The two teams sparred through the early stages and the score stood at 2-2 and then 4-4 as neither side managed to assert themselves. They shared the next two before the USA moved into a 6-5 lead.

The critical moment came in the 12th game, when the US took the bolder option of a pot when the safety might have been the option. Woodward missed the pot and from there Austria levelled it at 6-6.

It was to be the USA’s last meaningful contribution to the game as Austria took the next four to win the 12BET World Cup of Pool.

A delighted Ouschan said, “It’s crazy. After winning against England B with such a bad performance in the quarter-finals we didn’t think about lifting the trophy. But I played two almost perfect sets, Mario played incredibly well and made some important shots. I am so proud of him and myself, it is an amazing feeling.

“I played this tournament for the first time five years ago and lost in the second round to USA. Last year we lost to Chinese Taipei and I said to Mario, ‘next year we will win’ – and here we are with the trophy.”

A beaming He added, “It feels amazing, I don’t know what to say. I was struggling a little bit early on and I wasn’t stroking as well as usual but I played well at the end.”

For the USA, it was a disappointing moment but they were optimistic about the future.

Van Boening said, “We had them at 6-5 but we made a mistake when we should have played safe and that was the turn of the match. Only one team can win, that is part of the game.

“It has been tough for the last eight years but Skyler, he shot better than me. He will definitely be my partner next year. He should be on the Mosconi Cup team, he would be my number one pick.”

Woodward added, “It was a great week, I had fun, me and Shane played good all week. We got some back luck off the break but it happens. We made that one error where we didn’t think, we should have gone for the dead safety but we thought too fast. I have to get points now for the Mosconi Cup and make sure I get on that team.”