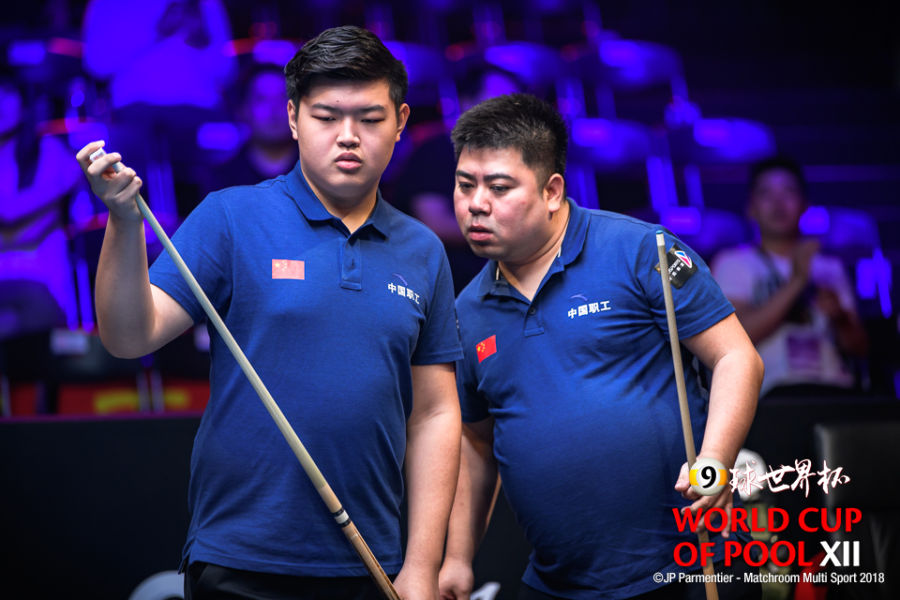 China B, the Philippines and Chinese Taipei all powered through to the last eight of the 2018 World Cup of Pool at the Luwan Arena, Huangpu District in Shanghai, as the quarter-final line-up begins to take shape ahead of the weekend.

In the opening match of the session, China B – Kong Dejing and Wang Ming – won a scrappy encounter against Germany as the pairing of Souquet and Filler made far too many errors for a race to seven match and were made to pay the price.

Commented Kong, “I was really nervous at the beginning but later on I stepped up and we took advantage of our opponent’s mistakes. We are very proud to reach the quarter-finals.”

The second match saw Team Philippines motor past England 7-0. The English pair of Mark Gray and Imran Majid spent the vast majority of the match as spectators as Carlo Biado and Jeff De Luna put on a clinic.

Commented Biado, “At the start of the match I felt a bit shaky but I said to myself, stay focus, relax and just play the game. Anybody can win and there will be pressure in the remaining games. Anything can happen.”

De Luna was looking ahead to their quarter-final match against the youngsters from China B, “We practised hard last night before we came here. China B have top players, they are good young players. We will prepare for a tough match.”

In the final match Greece paid the price for an early mistake to go 2-0 ahead. It was their last effective contribution to the match as Chinese Taipei took the next seven racks for victory.

It was an object lesson for Nick Malaj and Alex Kazakis as a single miss effectively ended their World Cup hopes, while Chang Jung-Lin and Cheng Yu-Hsuan cashed in on the Greek error in the most clinical way.

Cheng, “I am really happy because we played an almost perfect game with just one dry break. This was one of our best performances on TV. It doesn’t matter who we are against in the next round, we just have to play our own game.”

Down to the final eight in Shanghai