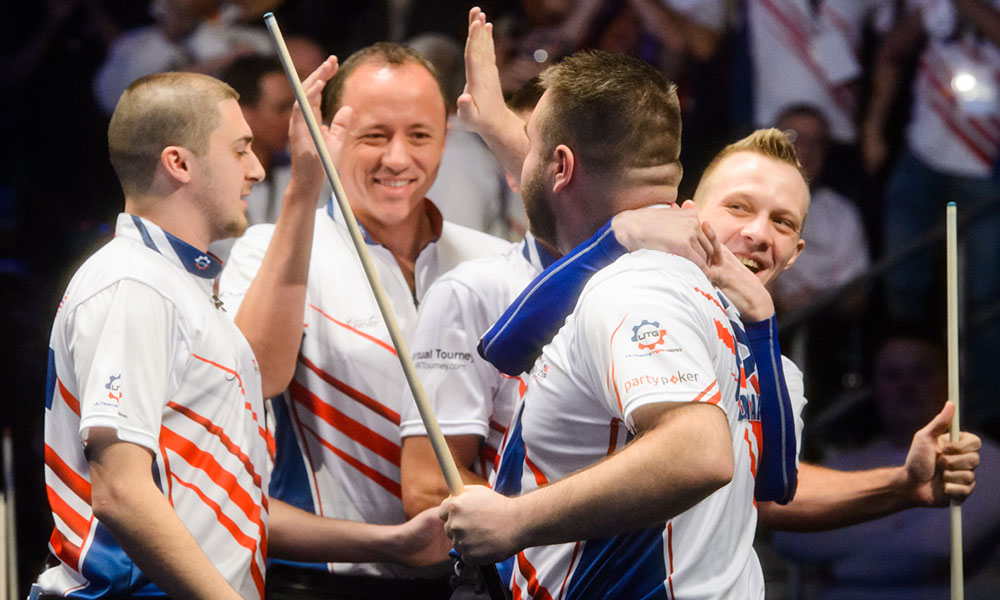 WITH ALL 28 qualifying events now complete, the team to represent the United States of America at the 23rd annual Mosconi Cup is now finalised and there is one change from the team that last 11-7 at the Tropicana last December. The annual transatlantic showdown takes place at the Alexandra Palace, London from Tuesday 6th to Friday 9th December,

Topping the rankings once again, and by some margin, is Shane Van Boening who will be making his tenth appearance in American colours. He will be joined by Mike Dechaine and Skyler Woodward who came second and third on the ranking respectively.

The two wildcards are the highly experienced Rodney Morris who like Van Boening will be making his tenth appearance, and Justin Bergman who comes into the side for the third time.

American captain Mark Wilson said, “This year we had the strongest effort to date for making the travel squad to London. That very fact speaks to the value of the points ranking tournament system, which in turn, is stimulating progress towards the U.S. return to the once proud stature in billiards played internationally.

“The final decisions regarding captain’s pick player selection were once again very difficult and intensified by the year long race for points. Certainly weight is given to composite point totals and then that is balanced with current form from the final tournaments.

“Shane Van Boening is the team’s No.1 and the finest player in the world. Dynamic and powerful, he has never played better nor has he been better prepared for this year’s Mosconi Cup and leading Team USA to triumph.

“Skyler Woodward is young, daring, and full of confidence. Last year he held his own by performing to his best and that experience bodes well for another standout performance in London.

“Mike Dechaine has finished the year in great form and has distinguished himself with multiple victories over international top talent. Power-breaking and terrific shot-making distinguish Mike as someone that can create their own offense without help from the opponent.

“Rodney Morris has regained his peak abilities and become the definition of hard work. He brings tremendous Mosconi Cup experience and just as important the “hang loose” attitude when facing adversity which will assist the less experienced players. He was just inducted into the Hall of Fame which indicates his standing in the sport.

“Justin Bergman is the final pick and his physical stature belies the immense dimension of his pool abilities. Justin is a no-nonsense player who does not flinch during the many hard fought battles certain to occur. Confident and very polished despite being young plus this being his third Mosconi Cup he will be looked upon as a solid presence within the middle of a very skilled line-up. Last year he was number one statistically for a Team USA and this year we anticipate a similar performance.”

Tickets for the Mosconi Cup are available from www.matchroompool.com

Team Europe Rankings Latest: All to play for in Kuwait