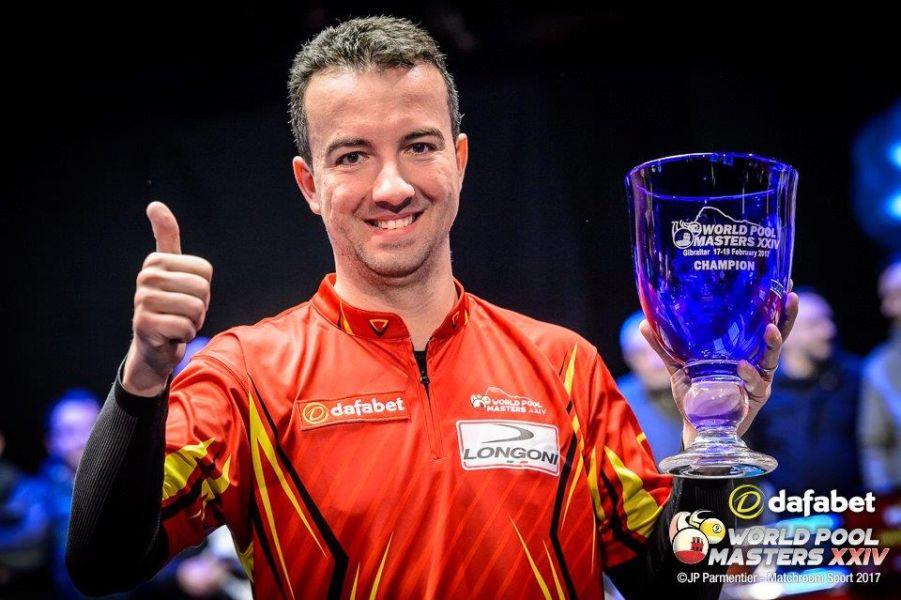 Alcaide is the Master!

SPAIN’S DAVID ALCAIDE is the 2017 World Pool Masters champion as he beat Jayson Shaw in a thrilling final that went down to the final rack. The Malaga man, who now lives near Madrid, had beaten a slew of star names en route to ultimate victory – Ralf Souquet, Shane Van Boening, Albin Ouschan and finally Jayson Shaw.

Alcaide was so overcome with emotion at the end that he needed to leave the arena and compose himself before the trophy presentation by The Hon Steven Linares, the Gibraltarian Minister of Sport.

The gutsy Spaniard picked up a $20,000 payday and more importantly joins a list all-time greats of the game who have held aloft this coveted trophy. The match itself was a thriller from start to finish.

“This trophy is for my children,” said Alcaide.

“Thank you to Matchroom for the invitation to the tournament and thank you to all of my fans. I hope to play here next year and defend the title.”

Shaw had been gifted a free pass in Sunday afternoon’s quarter final when Alex Pagulayan missed the 9 ball with the score at hill-hill, and he took advantage to cruise past Chang Jung Lin in the semi-final. Alcaide overcame a shaky start against Albin Ouschan in his last four match to dominate the table and run out an 8-6 winner.

As the final match unravelled, they shared the opening four racks before Shaw moved into a 4-2 lead in the race to eight encounter. Alcaide took the next and despite some nervous moments tied the match up in the eighth game.

Shaw though missed the brown 7 down the rail to give his opponent a great chance to clear which he did to take the lead for the first time at 5-4. The Spaniard came up with a dry break in the next and Shaw seized the chance to run out for 5-5.

Shaw took the next running out, but Alcaide got back to the table in the twelfth game and made a great run out to bring a roar from his bank of fans. The 8 and the 9 were stuck together but his clever positional play allowed him to get behind the 8 ball and push it into the centre pocket.

Alcaide made two balls on the break in the next but missed the 2 ball. With the balls out in the open, Shaw ran the table to regain the lead at 7-6. With chances to close the match out, Shaw made two misses and each time the cue ball rolled safe.

The second time, Alcaide, with little option chose to make a very short range jump shot and his fans erupted as the 6 ball skidded into the middle pocket. He closed out the rack to make it hill-hill and with the break in his favour it was to win.

A great break shot saw balls drop and with the table open, Alcaide composed himself for what must have been the most difficult run out of his lengthy career, and he made it to become the 16th different player in the 24 year history of the Masters to etch his name on the trophy.

Alcaide said, “I didn’t play my best in the final, I missed two or three easy balls but there is a lot of pressure and I managed to get a bit of luck. I beat the best two players in the World, Shane and Jayson. The last 6 ball, the jump shot, that is my best shot. It was unbelievable; I don’t know how I made it.”

For Shaw it was a disappointing ending; “I had two chances, I blew it. I didn’t deserve to win it after having two chances. I watched all his matches this week and he played well. He deserved to win.

“I hadn’t played for a couple of weeks coming here. For the first couple of matches I was just trying to get in stroke but as the tournament went on I got better. I had chances but didn’t take them at the end – I was a little bit pumped, but that is the way it goes.”

Earlier, Alcaide had overcome Albin Ouschan in a match that flowed two ways. First Ouschan won three in a row before Alcaide kept him rooted in his chair for six racks and he went onto win by two. Shaw had an easier run as he beat Chang Jung Lin at a canter. 8-3 was the final score.

Taking place in Gibraltar, the Masters sees 16 top international players competing in the shadow of the Rock of Gibraltar to determine the destination of the $20,000 top prize. The whole event is broadcast live on Sky Sports in the UK & Ireland and on networks around the world.

Down to the last four in Gibraltar