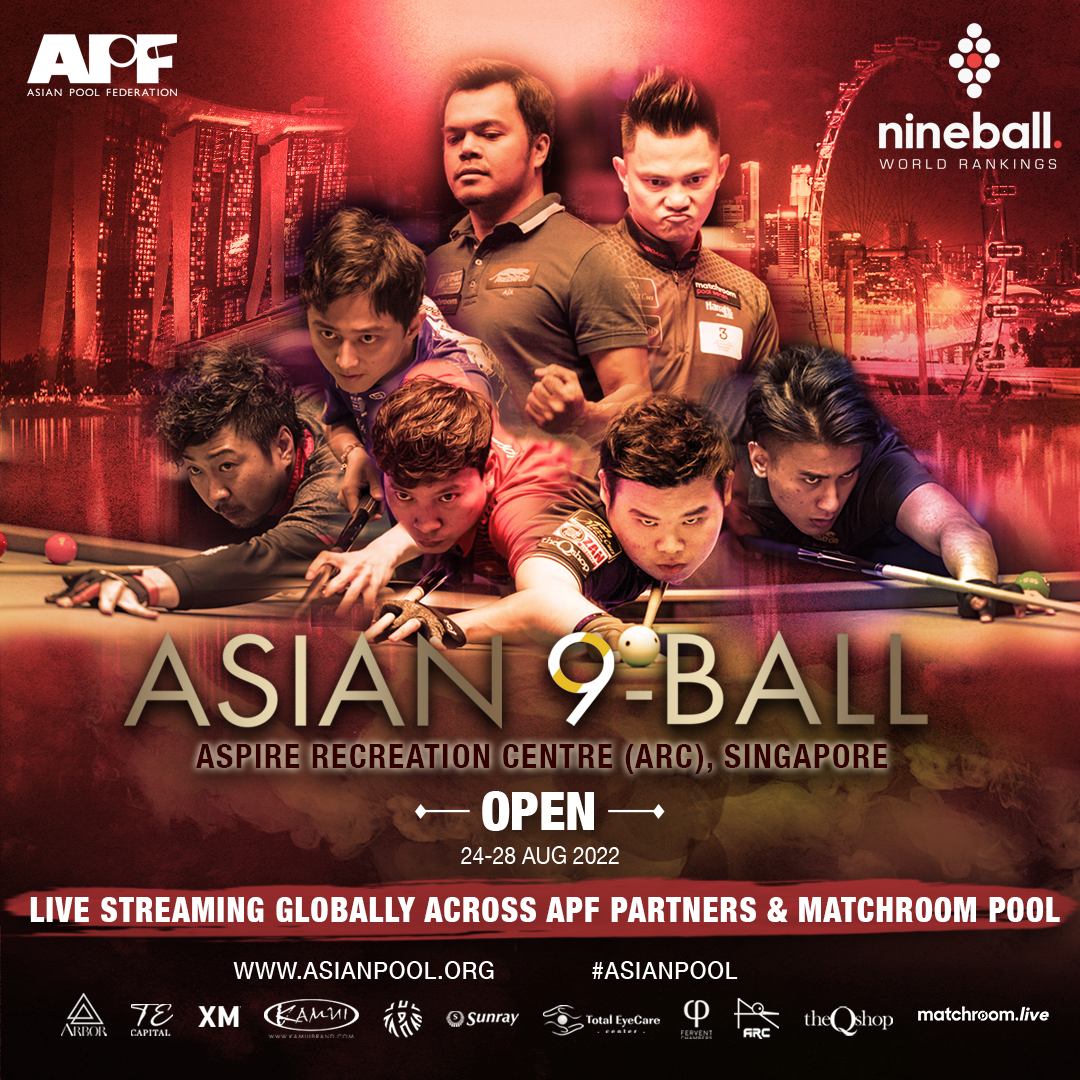 Matchroom Pool and the Asian Pool Federation will collaborate to broadcast the federation’s Asian 9-Ball Open worldwide live. This Nineball World Ranking Event will be shown live across APF’s Asian network partners and for the rest of the world via Matchroom Pool Youtube channel hosting over 172,000 subscribers and 70 million views and OTT platform Matchroom.Live; the coverage will boast some of Asia’s biggest pool stars as they head to Singapore from August 24th chasing the 10,000 Singapore Dollars and Nineball ranking points.

Following the launch of the Nineball World Rankings this year, the Asian Pool Federation’s tournament will become the first third-party tournament to be broadcast via Matchroom platforms with the likes of home favourite Aloysius Yapp, US Open champion Carlo Biado, Nineball Top 10 player Naoyuki Oi, former World Champion Ko Pin Yi and more set to compete over the five-day event.

As a further addition to develop third-party promoters, five-time Mosconi Cup winner and Sky Sports pundit Karl Boyes will be out in Singapore providing commentary and reporting on the live coverage with other Matchroom personnel set to join Boyes in the Garden City to provide support, knowledge, and engagement for the ranking event.

The tournament is the first ranking event on the Nineball World Rankings in Asia and it opens the door for other tournament organisers globally to benefit from Matchroom’s global reach on social media to live stream matches worldwide to millions.

Emily Frazer Matchroom Multi Sport Managing Director said: “When we first saw the Asian Pool Federation launch the Asian 9-Ball Open we knew it would be a perfect fit for our Nineball World Rankings; and now we’re so excited to further that partnership which sees the APF’s live coverage go global thanks to our huge following on social media, our in-house OTT platform Matchroom.Live and the level professionalism shown from the APF team. It opens the door to other eventsaround the world to join the rankings but also benefit from the exposure that comes with working with the leading promoter in the sport. This collaboration has always been one of our many goal’s associated with the Nineball World Rankings that we set for the future but with the Multi Sport team as ambitious as ever it looks like we’re ahead of schedule.”

“APF is thrilled by this exciting partnership with Matchroom which will bring pool sports to even greater heights in this region . The support by Matchroom has made it possible to enhance the coverage and quality of the event and this in turn will undoubtedly raise the visibility and profile of the event and place Asia firmly on the global map of pool sports. “ – Christopher Chuah, President of the APF

The addition of the tournament marks a major moment in the inaugural year of the Nineball World Rankings with the eventual winner of the APF 9-Ball Asian Open set to take home 10,000 Singapore Dollars in a maximum field of 96 with the field full.